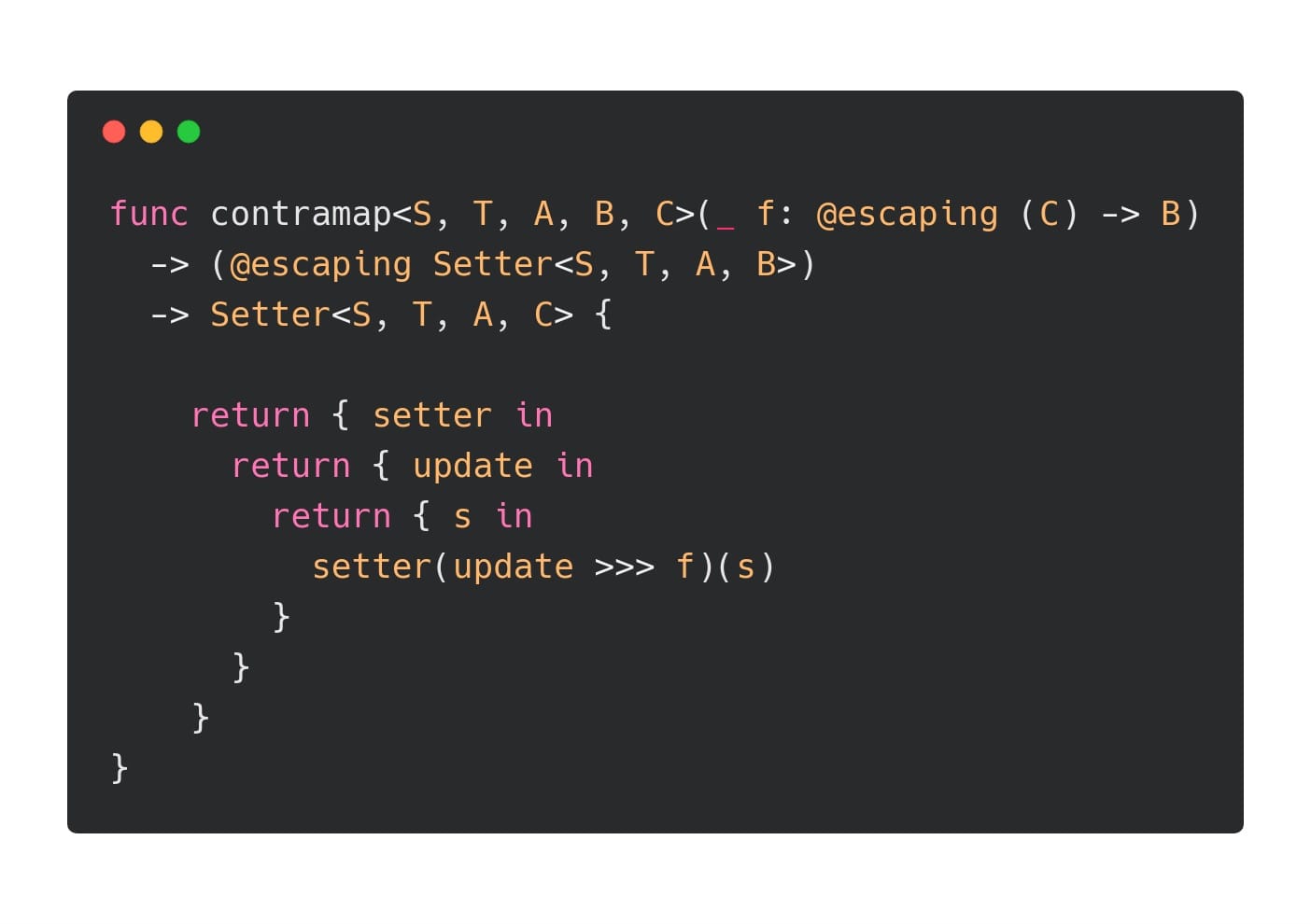 In episode #14 we explored the idea of contravariance and it led us to some interesting forms of compositions. The episode also had a large number of exercises, 18 in total(!), and they went pretty deep into topics that we didn’t have time to cover.

In today’s Point-Free Pointer we want to provide solutions to those exercises. If you haven’t yet had a chance to try solving them on your own, we highly recommend giving it a shot before reading further.

Determine the sign of all the type parameters in the function (A) -> (B) -> C. Note that this is a curried function. It may be helpful to fully parenthesize the expression before determining variance.

Recall from the episode on exponents and algebraic data types that function arrows parenthesize to the right, which means when we write (A) -> (B) -> C, we really mean (A) -> ((B) -> C). Now we can apply the bracketing method we demonstrated in the episode:

So now we see that A is negative, B is also negative, and C is positive.

We will apply the bracketing method to this expression, it’s just a little more involved:

That’s intense! One tricky part is how we determined that the A and B inside the tuple were in positive position, and this is because tuples are naturally a covariant structure: you can define map on the first and second components.

Now all we have to do is trace through the layers and multiply all the signs:

And there you have it!

Recall that a setter is just a function ((A) -> B) -> (S) -> T. Determine the variance of each type parameter, and define a map and contramap for each one. Further, for each map and contramap write a description of what those operations mean intuitively in terms of setters.

So now we see:

This means we should be able to define map on A and T, and contramap on B and S. Here are the implementations of each, with comments that show the types of all the parts we need to plug together:

These functions directly correspond to applying ||, && and ! pointwise on the predicates:

Create a predicate set powersOf2: PredicateSet<Int> that determines if a value is a power of 2, i.e. 2^n for some n: Int.

Use the above predicate set to derive a new one powersOf2Minus1: PredicateSet<Int> that tests if a number is of the form 2^n - 1 for n: Int.

We can contramap on powersOf2 to shift them all by one. However, which direction do we shift? Should we shift -1 or +1?

Well, in order to test if a number is of the form 2^n - 1 using our powersOf2 predicate set, we first need to shift the number up one, and then check if it’s a power of two. Therefore powersOf2Minus1 can be defined as such:

Find an algorithm online for testing if an integer is prime, and turn it into a predicate primes: PredicateSet<Int>.

The easiest (and most naive) way to tell if n is prime is to loop over all the integers from 2 to n - 1 and see if it divides evenly into n. One optimization we can make is to only loop over integers less than or equal to sqrt(n). The reason is that n’s factors cannot all be greater than sqrt(n), for then their product would be greater than n.

This description of the algorithm can be translated into code:

A few notes about this. First, we guard n != 2 to simplify constructing the range from 2 to sqrt(n). Also, the construction of the upper bound of that range is a little complicated in order to dance around Swift’s numeric system. However, once we are passed that it’s pretty straightforward. We use lazy on the range so that we can early out the moment we find a divisor. We map to compute if a value in the range is a divisor of n, and then we find the first one that is true. Finally, if that search came up nil, we know we have a prime!

The intersection primes.intersect(powersOf2Minus1) consists of numbers known as Mersenne primes. Compute the first 10.

We made a small mistake with this one…we didn’t mean to ask for you to compute 10! That’s too many, so let’s just compute 5. All we have to do is iterate over all positive integers and test them against the Mersenne set. We can use lazy+filter+prefix to do this!

And we can see that indeed all of those primes are one less than a power of 2!

Recall that && and || are short-circuiting in Swift. How does that translate to union and intersect?

Short-circuiting && and || means that false && x and true || x does not evaluate the expression x at all since it already knows the outcome of the logical expression. So, if x were an expensive computation we would be saving all of that work.

Applying this to PredicateSet, we see that since union and intersect were really just || and && under the hood, we can get short-circuiting behavior in our sets too. This means you should put all of your most expensive work last when it comes to chaining union’s and intersect’s together.

It turns out that dictionaries [K: V] do not have map on K for all the same reasons Set does not. There is an alternative way to define dictionaries in terms of functions. Do that and define map and contramap on that new structure.

A dictionary [K: V] is just a “partial” mapping of keys to values, where partial means that not every key is mapped to a value. This is precisely a function (K) -> V?. Defining map and contramap on this type is similar to defining it on functions, except we have to deal with that optional value, which we can do with map on optionals!

Define CharacterSet as a type alias of PredicateSet, and construct some of the sets that are currently available in the API.

Is A in positive or negative position in the function (B) -> (A, A)? Define either map or contramap on A.

As we have seen, tuples are a covariant construction since we can define map on each of their components (we did this with first and second in episodes #6 and #7. So, we’d expect functions into a covariant structure to also be covariant, and indeed:

What we are seeing is that if a type parameter appears multiple times in a signature, and all times it appears on the right side of ->, then we can consider the parameter covariant and thus can define map.

Is A in positive or negative position in (A, A) -> B? Define either map or contramap.

Again, tuples are covariant, and so putting them in a negative position might turn them negative. Let’s try defining contramap:

What we are seeing is that if a type parameter appears multiple times in a signature, and all times it appears on the left side of ->, then we can consider the parameter contravariant and thus can define contramap.

Consider the type struct Endo<A> { let apply: (A) -> A }. This type is called Endo because functions whose input type is the same as the output type are called “endomorphisms”. Notice that A is in both positive and negative position. Does that mean that both map and contramap can be defined, or that neither can be defined?

Well, let’s try defining each of map and contramap on Endo and see what goes wrong or right:

So, the types we have at our disposal in the Endo<B> block don’t exactly match up. In map we need to return something in B while we have b: B and f: (A) -> B. Now, of course we could just return b, but we didn’t use f at all, and that seems weird! Likewise, for contramap we need to return something in B and have b: B and f: (B) -> A at our disposal, so the only thing we can do is return b and ignore f entirely. Very strange!

It seems that although map and contramap can be defined on Endo, neither one does anything interesting. They just return the identity endomorphism, regardless of what f is.

Turns out, Endo has a different structure on it known as an “invariant structure”, and it comes equipped with a different kind of function called imap. Can you figure out what it’s signature should be?

Since neither map nor contramap were very interesting, maybe imap will have more to it. In both potential implementations of map and contramap on Endo we saw that we were missing some way of transporting values in the opposite direction of the f provided. For example, in contramap we could apply f(b) to get something in A, but then we would need some way to transform back to something in B.

This shows that if a type parameter appears on both sides of -> in a function signature, then to transform on that parameter you need something like imap, which comes equipped with functions into and out of the type.

Consider the type struct Equate<A> { let equals: (A, A) -> Bool }. This is just a struct wrapper around an equality check. You can think of it as a kind of “type erased” Equatable protocol. Write contramap for this type.

This contramap is quite similar to some of the other ones we’ve written:

Consider the value intEquate = Equate<Int> { $0 == $1 }. Continuing the “type erased” analogy, this is like a “witness” to the Equatable conformance of Int. Show how to use contramap defined above to transform intEquate into something that defines equality of strings based on their character count.

We can induce an Equate value on strings by contramapping over its character count. Here are three ways of doing it:

Phew! That was a lot!

Well, that concludes this week’s Point-Free Pointer. I hope that breaking down the exercises helped you learn something new about the material, and encouraged you to try more exercises from our episodes. They are a great opportunity to dig a lil deeper.