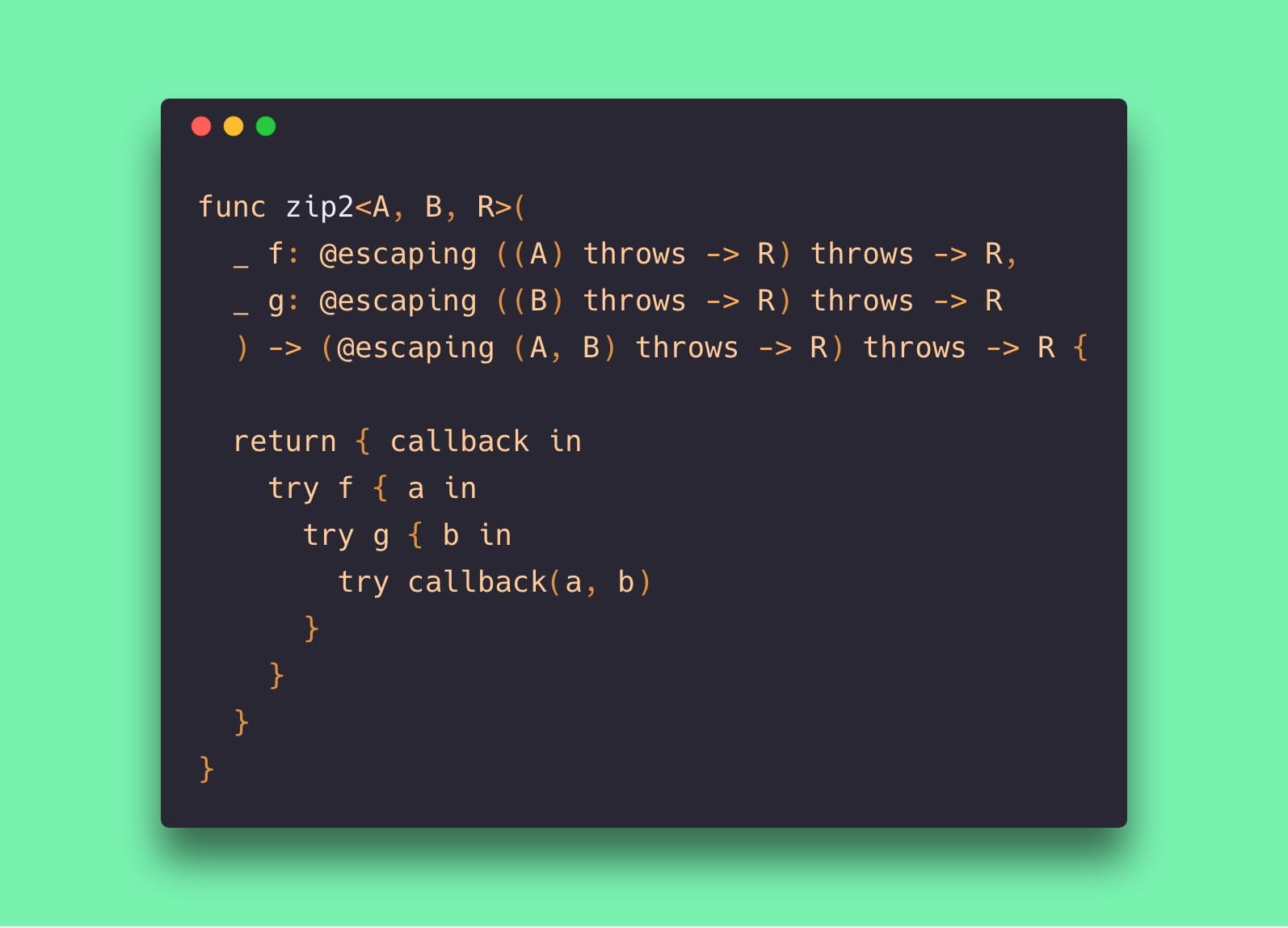 Last week we concluded our 3-part introductory series to the zip function. In the second episode of that series we saw that many types support zip-like operations, even though we don’t typically think of those types in that way. For example, two Result values can be zipped up, and even two functions with the same input can be zipped. At the end of the episode we provided some exercises to help viewers dive a little deeper into what zip had to offer, and this week we solve most of those problems!

Can you make the zip2 function on our Parallel type thread safe?

You can use GCD’s DispatchGroup to precisely coordinate two units of work so that we are notified when they are both finished, and we avoid the racing problems we mentioned in the episode. Here’s how we can use it:

Here we have chosen to notify the group’s completion on the main thread, but a more robust Parallel implementation might make that customizable. It’s interesting to think of DispatchGroup‘s as just GCD’s version of a zip operation. We feel that zip is a little more expressive and composable than DispatchGroup’s are.

Although this F4 type is closely related to Parallel, its zip implementation is a bit different. If we try to repeat what we did for Parallel above we will quickly run into the problem that we must return an R value from each of the fa.run and fb.run functions, and we don’t have any such value. Instead, we can take the approach we first took in episode two when trying to define zip on Parallel, and we will nest the run blocks:

Find a function in the Swift standard library that resembles the function above. How could you use zip2 on it?

Have you ever looked at the method signature of withUnsafeBytes? I mean, really looked at it? Here it is:

There’s a lot of noise in this function signature, so let’s clear it up a bit by removing all the throws stuff and shortening the Result generic name:

Ok, now that we have zip defined, how can we use it? Well, imagine we had some C function that was imported that operates on UnsafeRawBufferPointer values. Then we could zip up the withUnsafeBytes of two arrays and invoke that C function:

This allows you to clearly express that you want to grab the underlying bytes of the array storage and invoke a C function with those contents. The alternative way is to nest multiple calls to withUnsafeBytes, which leads to highly indented code and “callback hell”:

Notice that we had to nest two layers deep, and if we were to need more unsafe bytes the indentation would continue to grow. The zip method for handling unsafe bytes is shorter and more expressive.

This exercise consists of multiple parts, and aims to explore what happens when you nest two types that each support a zip operation.

Consider the type [A]? = Optional<Array<A>>. The outer layer Optional has zip2 defined, but also the inner layer Array has a zip2. Can we define a zip2 on [A]? that makes use of both of these zip structures? Write the signature of such a function and implement it.

We accidentally put in both part 1 and 2 episodes, so we already solved it before!

Consider the type [Validated<A, E>]. We again have have a nesting of types, each of which have their own zip2 operation. Can you define a zip2 on this type that makes use of both zip structures? Write the signature of such a function and implement it.

Let’s start by writing the signature of the function we want to implement:

This allows us to express the idea of taking two lists of validated values, and combining them into one list, where if there are any errors they combine, and otherwise we get a tuple of the valid values.

Consider the type Func<R, [A]>. Again we have a nesting of types, each of which have their own zip2 operation. Can you define a zip2 on this type that makes use of both structures? Write the signature of such a function and implement it.

Let’s start by writing the signature of the function we want to implement:

We know how to perform zip on Func values, so we could start with that:

Also, map on Func operates on the second type parameter, in this case ([A], [B]), and that’s precisely the shape we like for zip, so sounds like we can do those two operations together:

Finally, conisder the type Parallel<Validated<A, E>>. Yet again we have a nesting of types, each of which have their own zip2 operation. Can you define a zip2 on this type that makes use of both structures? Write the signature of such a function and implement it.

Well, now I think you are probably seeing the pattern, but let’s go through the steps anyway. Let’s start by writing out the signature:

This allows us to simultaneously perform two parallel tasks and two validations at the same time, bringing the results into one single value. Very powerful!

Every implementation of zip on nested containers looked identical. We first zip the outer containers, then map on that container with the zip on the inner containers. What we are seeing here is that nested zippable containers are always zippable themselves. Unfortunately Swift does not have the type level features that allows us to express this algorithm generically, and so we are forced to write the zip2(lhs, rhs).map(zip2) boilerplate every time we want to nest two zippable containers. Maybe someday this will be better!

And that’s the solutions to the second part of our 3 part introductory series to zip! If you thought those were too easy, be sure to check out the exercises to part 3 too. Until next time!