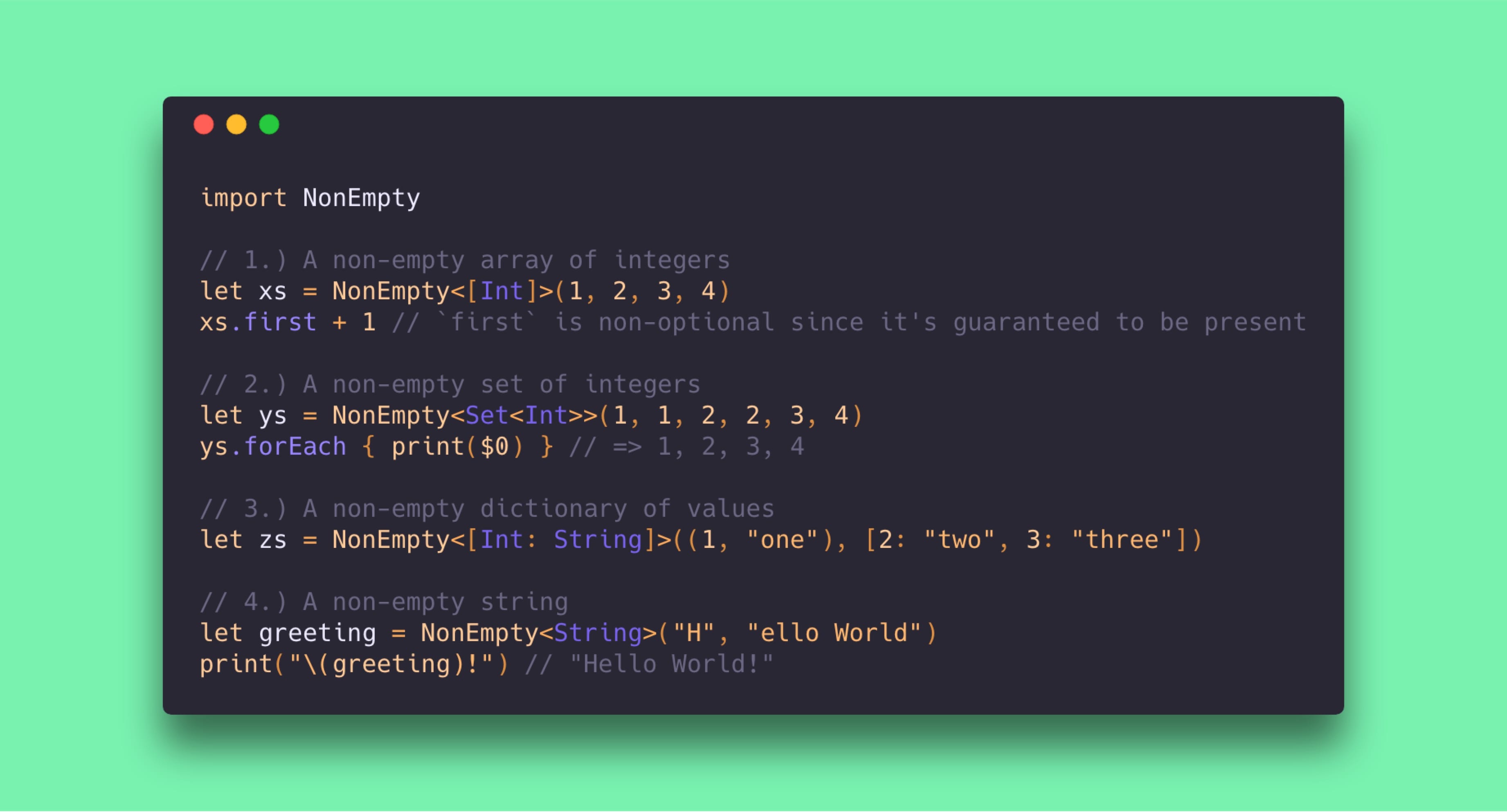 Today we are open sourcing NonEmpty, a Swift library for modeling non-empty collection types. This small library can help make your code safer and more expressive with very little work.

We often work with collections that we know should never be empty, but the types we are given in the Swift standard library make no such guarantees. To compensate, we must sprinkle if’s and guard’s into our code so that we can protect against the case that we know should be impossible.

We’ve explored the concept of “algebraic data types” a few times on this series, and it’s a topic almost entirely devoted to the endeavor of making “impossible states unrepresentable” by the compiler. Our most recent episode even showed how we could use algebra to naturally lead us to a type that gives us compile-time guarantees that a collection can never be empty.

We believe that a compiler proven non-empty type is incredibly important for every developer to have at their disposal, and so that’s why today we are open sourcing our NonEmpty library.

The core of the library is just a single generic type, NonEmpty<C>, which allows you to transform any collection type C into a non-empty version of itself. The majority of the code in the library consists of conformances on NonEmpty to make it act as much like the collection that it wraps.

Using NonEmpty it is very easy to model an array that is provable to never be empty:

Notice that in the last line we are adding 1 directly to xs.first. That is possible because with the NonEmpty type first actually returns a non-optional since it is guaranteed to produce a value, and therefore we do not even have to think about the nil case.

We are not limited to only creating non-empty arrays. We can also create non-empty versions of other collections in the standard library, like sets!

But why stop at sets? We can also model non-empty dictionaries:

Heck, we may not think of things like this often, but even String is a collection. We can make non-empty strings!

All of these collections are proven, by the compiler, to always contain at least one value. We no longer have to guard against an empty collection or worry about sending invalid data to an API. The compiler is keeping us in check.

There are many applications of non-empty collection types, but it can be hard to see since the Swift standard library does not give us this type. We don’t often think about whether or not a non-empty array would be more appropriate than a potentially empty array.

Here are just a few such applications:

We often reach for arrays in our API design because that is what we have at hand, but many times it can be strenghtened to a non-empty array. For example, consider implementing a groupBy function on Sequence:

The implementation is pretty straightforward, and it works well enough. However, can the [Element] array inside the return ever be empty? What key value in A could even be associated with an empty array? The only way to generate A values is from Element values.

Indeed, the [Element] array can never be empty, but the API isn’t letting us know that. So in our code, when we interact with this array we are invariably going to have to deal with its potential emptiness.

We didn’t have to change much in the implementation, we get essentially the same output, but the API is describing more about the data it returns now.

Swift 4.2 introduces a new random API, and apart of the API is the ability to get a random value from a collection:

Notice that the API returns an optional, and that is necessary because the array could have been empty. But, we see right here it is definitely not empty. We have provided the values right inline with an array literal. And computing random values like this, with an inline array literal, is quite common, so it’d be nice if we could avoid the optional since it’s obvious the array is non-empty. And we can!

The random API will return non-optional values when operating on the NonEmpty type.

GraphQL is a query language for APIs that’s getting more and more popular. We might write a client that generates a query from a list of fields for a GraphQL type, and we may default to using a plain ole array or set since that’s what’s available to us in the standard library. Here’s an example of a very simple fieldset and query builder:

This last line is a programmer error and makes an invalid GraphQL query. GraphQL requires at least one field be provided. So, the server will reject it with an error and now the client has to handle this case.

It would have been better to use a NonEmptySet instead of a plain Set. Amazingly the implementation of query doesn’t need to change, just the call site:

We now have the compiler proving to us that it is impossible to generate an invalid GraphQL query of this form.

Let’s do one more just to show how often these non-empty types pop up in every day coding!

The Result type is quite popular in the Swift community, and it’s useful for distinguishing a successful value from a failure.

There’s a specialization of the Result type that is useful and popular enough to warrant it having a new name. It’s called Validated, and it represents a value that has gone through some validation process. It is either valid with the value produced, or it is invalid with a list of validation errors:

This is handy because now when validations fail we get to supply everything that went wrong, not just a single error:

However, our choice of [Error] for the .invalid case is not quite right. We chose it because that’s what we have at hand in the Swift standard library, but what would it mean to have an empty array of validation errors?

It says its invalid, but the array of errors is empty. So… does that mean it’s valid? But… there’s no value provided so it can’t be valid? 🤔

What we really wanted to do was use a non-empty array!

Now it’s impossible to get into the weird state of an invalid value with no validation errors.

We have now see 4 applications of the NonEmpty type, but there are so many more. We encourage the reader to start looking critically at their own application code, their library APIs and their interactions with other APIs to see where non-empty types might be appropriate. By pushing the non-emptiness requirement to the type level you get to enforce this invariant in a single place rather than sprinkle if’s and guard’s into your code.

If you want to give NonEmpty a spin, then check out our open source repo.