A little over 2 weeks ago we released the Composable Architecture, a library for building applications in a consistent and understandable way, with composition, testing, and ergonomics in mind. Today we are releasing our first support library to go along with it: ComposableCoreLocation.

One of the most important principles of the Composable Architecture is that side effects are never performed directly, but instead are wrapped in the Effect type and is returned from reducers, and then the Store later performs the effect. This is crucial for simplifying how data flows through an application and for gaining testability on the full end-to-end cycle of user action to effect execution.

However, this also means that many libraries and SDKs you interact with on a daily basis may need to be retrofitted to be a little more friendly to the Composable Architecture style. That’s why we’d like to make it easier to use some of Apple’s most popular frameworks by providing wrapper libraries that expose their functionality in a way that plays nicely with our library.

The first such library is ComposableCoreLocation, a wrapper around CLLocationManager that makes it easy to use from a reducer, and easy to write tests for how your logic interacts with CLLocationManager’s functionality.

To use it, one begins by adding an action to your domain that represents all of the actions the manager can emit via the CLLocationManagerDelegate methods:

Next we add a LocationManager, which is a wrapper around CLLocationManager that the library provides, to the application’s environment of dependencies:

Then, we create a location manager and request authorization from our application’s reducer by returning an effect from an action to kick things off. One good choice for such an action is the onAppear of your view. You must also provide a unique identifier to associate with the location manager you create since it is possible to have multiple managers running at once.

With that initial setup we will now get all of CLLocationManagerDelegate’s delegate methods delivered to our reducer via actions. To handle a particular delegate action we can destructure it inside the .locationManager case we added to our AppAction. For example, once we get location authorization from the user we could request their current location:

If the user denies location access we can show an alert telling them that we need access to be able to do anything in the app:

Otherwise, we’ll be notified of the user’s location by handling the .didUpdateLocations action:

Once you have handled all the CLLocationManagerDelegate actions you care about, you can ignore the rest:

And finally, when creating the Store to power your application you will supply the “live” implementation of the LocationManager, which is an instance that holds onto a CLLocationManager on the inside and interacts with it directly:

This is enough to implement a basic application that interacts with Core Location, but that’s only the beginning 😁.

The true power of building your application and interfacing with Core Location in this way is the ability to test how your application interacts with Core Location. It starts by creating a TestStore whose environment contains a .mock version of the LocationManager. The .mock function allows you to create a fully controlled version of the location manager that does not interact with CLLocationManager at all. Instead, you override whichever endpoints your feature needs to supply deterministic functionality.

For example, to test the flow of asking for location authorization, being denied, and showing an alert, we need to override the create and requestWhenInUseAuthorization endpoints. The create endpoint needs to return an effect that emits the delegate actions, which we can control via a publish subject. And the requestWhenInUseAuthorization endpoint is a fire-and-forget effect, but we can make assertions that it was called how we expect.

Then we can write an assertion that simulates a sequence of user steps and location manager delegate actions, and we can assert against how state mutates and how effects are received. For example, we can have the user come to the screen, deny the location authorization request, and then assert that an effect was received which caused the alert to show:

And this is only the tip of the iceberg. We can further test what happens when we are granted authorization by the user and the request for their location returns a specific location that we control, and even what happens when the request for their location fails. It is very easy to write these tests, and we can test deep, subtle properties of our application. 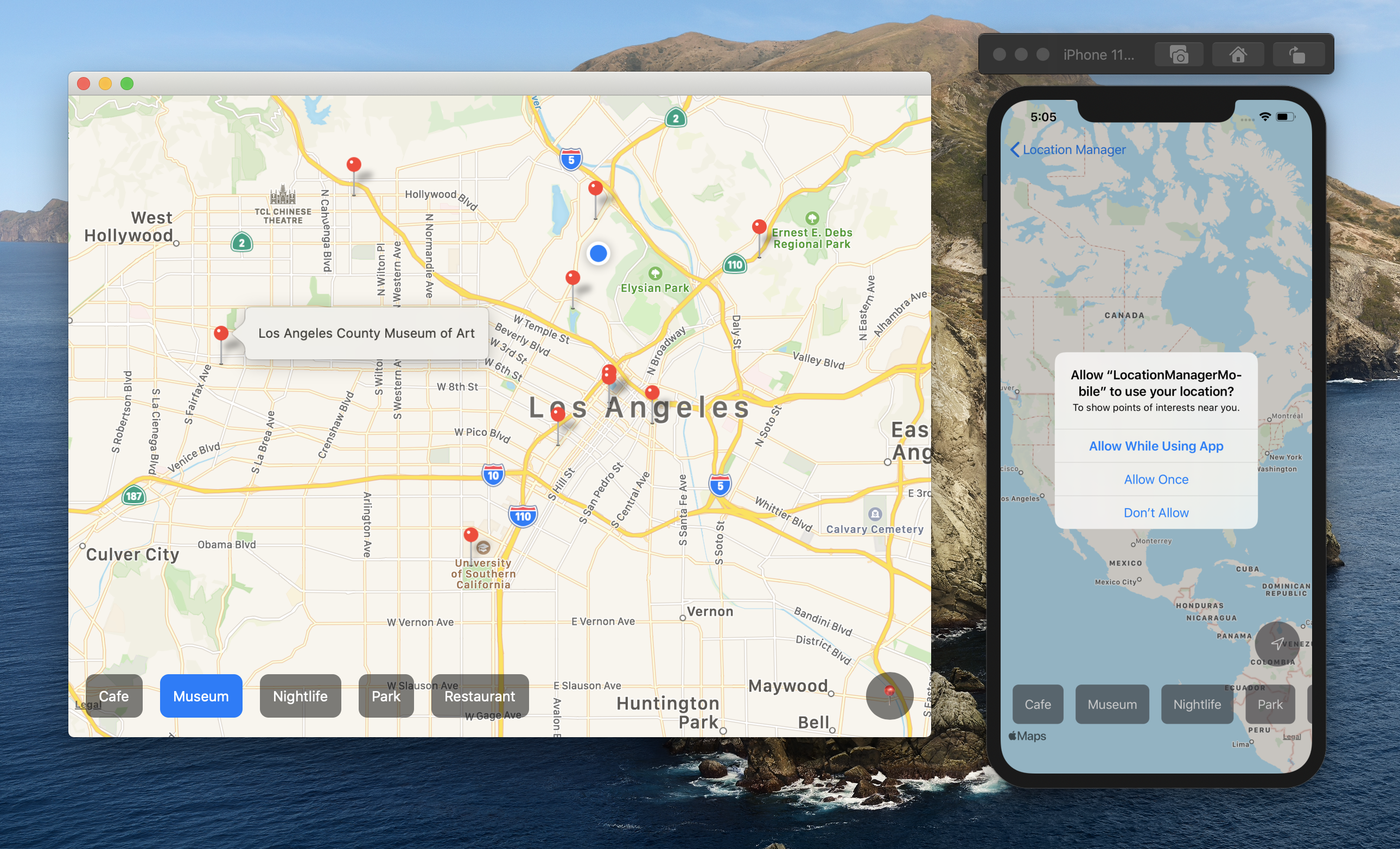 To show a more advanced usage of ComposableCoreLocation we have built a new demo application in the library repo. It shows how to:

Try it out today

We’re excited to release this support library for the Composable Architecture, and hope it can help simplify and strengthen your application’s interaction with Core Location. Get access to it today by updating to version 0.2.0.

We will have more support libraries like this coming soon, so keep an eye out!