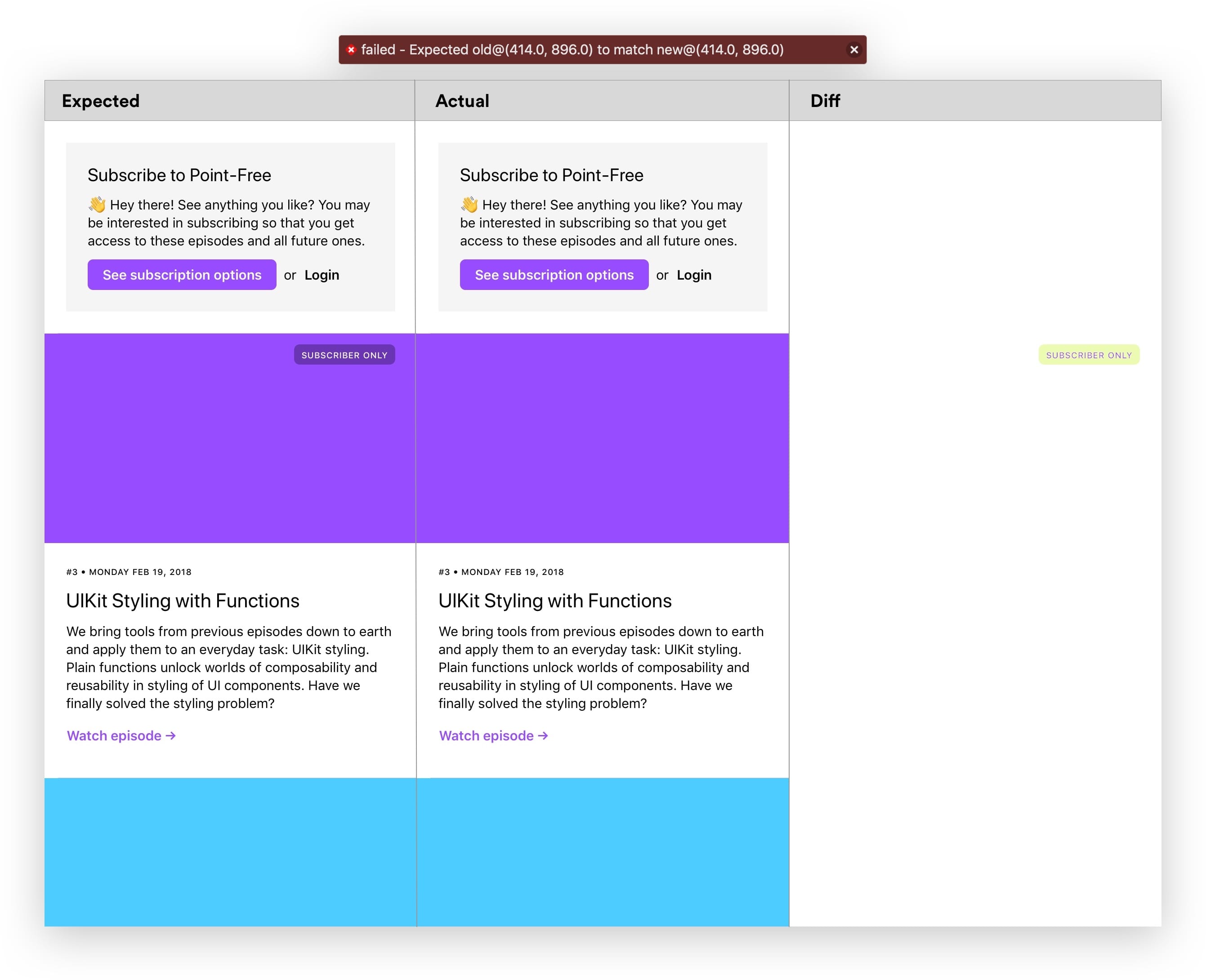 The iOS community has been a large proponent of snapshot testing, mostly thanks to the wonderful iOSSnapshotTestCase library (formerly known as FBSnapshotTestCase). It introduced a new kind of test coverage for iOS applications by allowing us to assert against an image screenshot of a UI component. This is a whole new level of testing that can catch regressions in the pixel data of our UI so that you can make sure that future changes and refactors do not introduce visual regressions into your views.

However, iOSSnapshotTestCase has not evolved much over the years, and its still largely written in Objective-C, which means the API isn’t as generic and composable as it could be in Swift. Also, it only allows snapshotting CALayers and UIViews into a PNG format, but there are many more types we might want to snapshot and many more formats we want to snapshot into.

That’s why today we are excited to officially announce SnapshotTesting 1.0: a modern, composable snapshot testing library built entirely in Swift!

One of the most important decisions we made in designing this library is to eschew the liberal use of protocols, as is encouraged in “protocol-oriented programming”, and instead use plain concrete datatypes. In the former style we would create a system of protocols that users of our library conform to in order to unlock functionality, whereas in the latter style we provide a system of concrete generic types that the user will create for their types in order to unlock functionality. It’s a seemingly small distinction, but it unlocks worlds of new possibilities.

Most importantly, it allows us to create multiple snapshot strategies for a single type, whereas types can conform to a protocol only a single time. This means we can have a image strategy for snapshotting UIViews, but also a text snapshot strategy that prints out the view’s hierarchy with all of its children and their properties.

We can also create strategies for types that cannot conform to protocols, like tuples, functions and Any. The last one is particularly powerful because it means we can create a snapshot strategy for any type by using Swift’s dump function, which is just not possible with protocols.

SnapshotTesting supports CocoaPods, Carthage and the Swift Package Manager, so bringing it into your project should be a cinch. Once integrated, you can immediately start snapshotting your views. You don’t even need to change the superclass of your test cases:

Upon first run of this test a screenshot will be generated and saved to disk. Subsequent runs will generate new screenshots and compare them against what is on disk, and if a single pixel is off the test will fail. If the changes in the screenshot are intentional and you want to record a new screenshot to disk, then you can put the test into record mode:

Now when running this test a new screenshot will be generated and written to disk, and when you are happy with the new image you can remove the record = true flag.

SnapshotTesting goes well beyond just snapshotting views as PNG images. We can snapshot any type into any diffable format. For example, you may have an ApiService that is responsible for preparing requests to your web API by attaching authorization and some custom headers. You can write a textual snapshot test for that logic:

This will record the following data to disk:

Then, later if we performed a refactoring of this code, and accidentally messed up the logic that sets the HTTP method, we would get a test failure with a nicely formatted failure message:

It’s worth comparing this to the more traditional way of unit testing using XCTAssert. You would have to create an entire URLRequest from scratch and assert against it. And then if it failed you wouldn’t have any specific information of what went wrong. With snapshot testing we are getting very broad coverage on the full request, including URL, method, headers and body, with very little work. And when the snapshot fails we get a nice, human-readable failure with a diff.

We call this operation pullback, and it makes it easy to create all new snapshot strategies out of existing ones. For example, the library comes with a Snapshotting<UIImage, UIImage>.image value for snapshotting images into the image format. We can pull that back to work on layers by using the function (CALayer) -> UIImage that renders a layer into an image:

We can then pull that back to work on views by using the function (UIView) -> CALayer that plucks out a view’s layer:

And with just a few lines of code we created 3 all new snapshot strategies from a single base one. This is the essence of composability that we should strive for in library design.

Some values need to perform a lot of work before they are ready to be snapshot, and many times that work happens with the use of async callbacks or delegates. A common example is WKWebView for snapshotting web content. This is why we also support async snapshots. When creating a Snapshotting<Value, Format> value you can provide a function (Value) -> Async<Format>, which allows you to asynchronously turn your value into the diffable format.

We can use this to snapshot WKWebView by creating a private navigation delegate class, and using it inside the async function:

It took a little bit of extra work, but now we can deterministically snapshot web views without worrying about its contents not loading in time.

Not only is the API of SnapshotTesting a pleasure to use, but we’ve also packed a whole bunch of features not found in any other snapshot library:

And believe it or not, there’s even more.

Give it a spin today!

If you currently use a form of snapshot testing in your Swift applications, then you may be interested in giving this library a spin. Not only does it improve upon the classic snapshot tests of UI as images, but will also encourage you to begin snapshotting your data structures as strings to gain even more test coverage. Check it out today!

The design of this library has been extensively covered in a series of episodes on Point-Free. We first discussed the idea of protocol witnesses and how to translate protocols into concrete types in a two-part miniseries (part 1), part 2. We then expanded on those ideas to show how to convert some of the more advanced concepts of Swift protocols into concrete types in another two-part miniseries (part 1, part 2). And finally, we applied all of those ideas to designing this very library, first in the protocol-oriented style (part 1, part 2), and then refactored into the witness-oriented style.