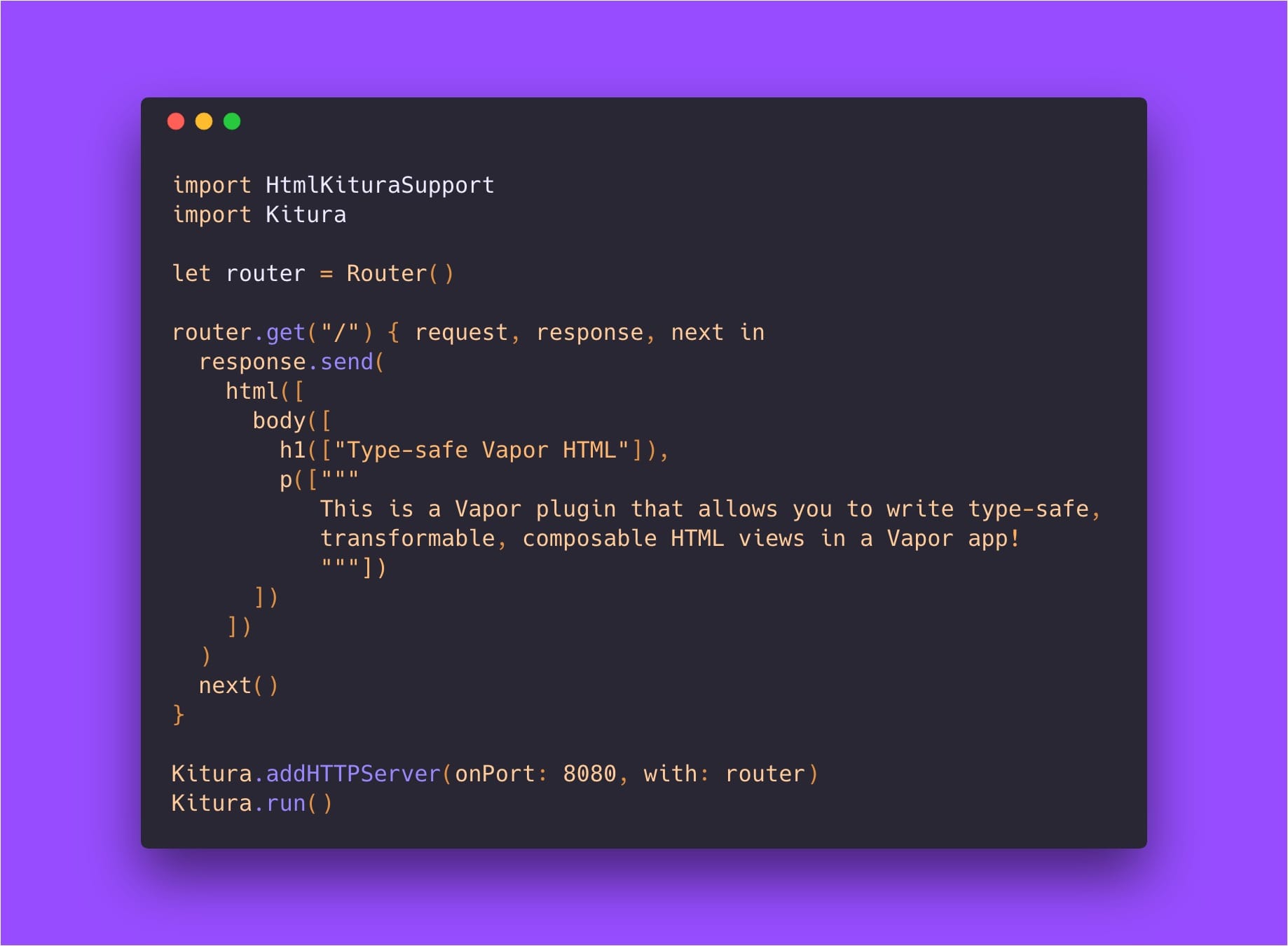 Today we’re open sourcing a plugin for Kitura to render type-safe HTML. It provides a Swift compile-time API to HTML that prevents many of the runtime errors and vulnerabilities of traditional templated HTML rendering.

We’ve spent the past 4 weeks discussing DSLs in Swift, and yesterday it all culminated with the open sourcing of swift-html, our new Swift library for building type-safe, extensible and transformable HTML documents. The design of this library has been battle-tested for the past year, for it powers every single page on the Point-Free site. The entire code base of this site is open source, we built it from scratch in the functional style, and we even gave a tour of the site on a recent episode.

However, we know that most people are not going to adopt all of our techniques in building a Swift web app (at least not yet 😉), and so we want to make sure that the HTML view layer is accessible to everyone. That’s why today we are open sourcing a new micro library for bringing our swift-html library into any Kitura web application, one of the most popular server-side Swift frameworks available today!

Typically a Kitura app renders HTML views through the use of Stencil, which is the templating language we explored in our most recent episode. As an example, we could create a Stencil template by saving the following to a .stencil file:

And then from a route you could render this template with an array of users by doing the following:

This templating language is flexible, easy to use, and great as a starting point. However, it has all of the problems that we covered in our last episode, including lack of type-safety, no good tooling support (autocomplete, syntax highlighting, refactoring, debugging, etc.) and it can be more rigid that what we are used to.

Luckily Kitura makes it very easy to support other methods of rendering besides Stencil, and that is precisely what our new library helps with. Simply add the following to your Package.swift file:

And then you can pass a Node value to the response.send function in your router endpoint and it will automatically be rendered!

And that’s all there is to it!

If you are building a Swift web app using Kitura we hope that you will consider using our swift-html-kitura plugin as way to create your HTML views. We think you’ll be pleasantly surprised how nice it is to code up views in Swift and Xcode, and there are lots of opportunities for code reuse and composability when building HTML views in this way.